The other day  while I was listening to Immaculate Heart Radio I received one of those wonderful aha moments, compliments of the Holy Spirit.  He spoke through Sister Moss (now Mother Miriam of the Lamb of God) and Patrick Coffin.  It was a profound gift of grace that took me to a higher level of faith.  But, just using words, how do I relay it to you?  Unfortunately, we can't always give away gifts of grace at will.  But I'm going to try.  I really want you to get this just like I did that day.  You may want to pray  a short prayer to the Holy Spirit here.

A caller to Catholic Answers was upset and lamenting about her homilist at her church Sunday talking about Jesus as if he switched back and forth between His human and divine side.  She was referring to Mt 15:21-28.  In this gospel Jesus could seem to talk to this Canaanite woman harshly,  in a way that  a mere human would.   Patrick Coffin said that the temptation is to want to domesticate  Jesus and explain away His divinity when he sounds less Christian.  But, Mother Miriam reminded the caller that He never ceased being God and that He can not make a mistake.  He could not lie. He could not sin. Now here is the grabber (Come Holy Spirit, help!) Are you ready?  Sister Moss said "In His mommy's arms He held the universe together."  Did anything just happen to you?

Here's what happened to me.  My thoughts flashed to the altar and God being present as a baby and in the appearances of bread and wine.  He's there on the altar as the zygote in Mary's womb, the baby, the teacher and on the cross, simultaneously, for he transcends time,  while holding the universe together.

This morning before mass I looked around the church and thought of His presence in the tabernacle and in the monstrance in the chapel and in hundreds of thousands of churches and tabernacles around the world.   Then the greatest thought of all occurred.  In a few minutes He will be in my body, running through my veins and all the while holding the universe together.  With this understanding why would anyone reduce Him to just a symbol?  How could anyone leave His church? Where else could we go?  The Master has the words of eternal life and He holds the universe together. 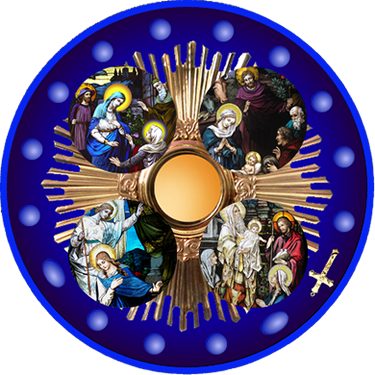 The "BEAD of LIFE"

Published at 3pm on Fridays

For the sake of His Sorrowful Passion

Eternal Father I offer You the Body and Blood Soul and Divinity of Your Dearly Beloved Son, Our Lord Jesus Christ. In atonement for our sins and those of the whole world.

Have Mercy on us and on the whole world